The sad side of Rione Sanità

While I was in Rione Sanità a few days ago, I took this photo, which was on a wall beside a shop that sold offal, including tripe (trippa). The fellow pictured is Totò, a famous actor and poet who was born in this district of Naples. I didn’t think I’d be using the image, it just took my fancy.

Then, when I was reading some stuff online about this area, I came across this article (translated by Google) and photo from a newspaper, dated only a couple of years ago.

“Six gunshots exploded during the night in the Sanità district of Naples against two commercial businesses. One of the two owners adheres to an anti-racket association. The report of the incident was presented this morning to the police. Three bullets are stuck in the wall next to the gate of a butcher’s shop in Via Sanità. Three more in the gate of an underwear shop.The “spread” takes place just a few days after the first cameras have started up in the Sanità district, which has long been the scene of a fight between Camorra clans.”

The marks in the wall show where the gun slugs were embedded. I made a point of going back to see if they were still visible, but the wall has been re-plastered.

The same day that I had taken the photo of Totò, I saw this little statue, and went over for a closer look. It turned out to be another fairly recent reminder that there is a dark side to life in some parts of Italy. On 15 September 2015, 17 year old Genny Cesarano was in the wrong place at the wrong time, and was killed by a stray bullet  in cross fire between 2 rival gangs vying for territorial control, the “stretch” mentioned in the newspaper article. Four men were found guilty of his murder and all received life imprisonment sentences. 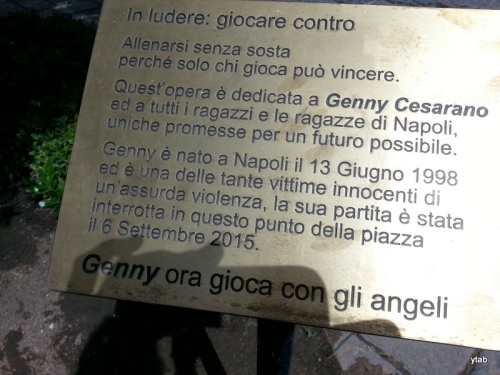 I haven’t been back to this district again.

37 responses to “The sad side of Rione Sanità”

Now let's hear it from you, folks. Cancel reply